The JFX Dubstore Is Now Open

The JFX Dubstore Is Now Open

JFX Dubstore is a new website from French Dub label Jarring Effects based in Lyon, France which in their own words is "Created by dubbers for dubbers and dub fans”. The site features single track dubplates in top quality WAV and AIF, not MP3, that are available nowhere else on internet from French producers such as OBF and Pilah, Root Massacre, AntiBypass (Dub Addict) and Fabasstone, Natural High, Twelve, 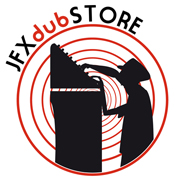 The aim of all this is for the productions to be played at Sound Systems or used in remixes to which at the moment they are running competition for people to remix this Brother Joe Pilgrim accapella from Tribulations. Just send them your own remix before May 15th 2011, and the 2 favourite ones will be published on JFX dubstore (see instructions in .zip)