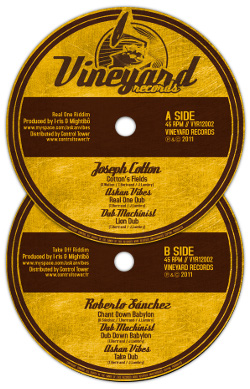 This six track EP is produced by Askan Vibes made up of I-ris (Bordeaux, France) and Mightibô (Ouarzazate, Morocco), in collaboration with The Dub Machinist also from France. The vocals on the A side, Cotton Fields, are supplied by veteran vocalist Joseph Cotton, who after spending a year working in the Jamaican police force left to concentrate on his recording career which he initially started with Joe Gibbs, under the name of Jah Walton in 1976.

For the flip renowned Spanish producer Roberto Sanchez steps out from behind the mixing desk again, having sung lead on songs such as Cool & Calm with the Lone Ark Riddim Force, to provide pleading soulful call to Chant Down Babylon.

Both tracks are then complimented with dub workouts full of effects from both Askan Vibes and The Dub Machinist.