Bost and Bim Remix Their Own Hustlin Riddim

Bost and Bim Remix Their Own Hustlin Riddim

The French duo releases new versions of its riddim.

Last year French versatile production and mixing duo Bost & Bim – responsible for some huge mash-ups with their Yankees A Yard compilations – put out the Hustlin’ riddim. Hawaiian singer J-Boog’s cut Coldest Zone was one the best tunes of 2010. 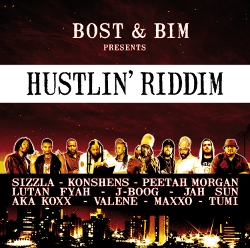 So it comes as a pleasant surprise when I heard that they are dropping two new versions of this wicked hip-hop influenced rub a dub one drop.

Five cuts are now available in a digital Prince Jammy Style. Pick of the bunch is Valene’s intense My Ghetto Cry.

The other version is in a nyabinghi style with a scent of soul. Pick of these five are once again J-Boog and his Coldest Zone.

This varied one riddim album is available as digital download worldwide and as CD in France.