Pressure Sounds has just announced a bunch of new releases from the late and great melodica virtuoso Augustus Pablo. The new releases are focusing on his digital era and spans from 1986 to 1994. 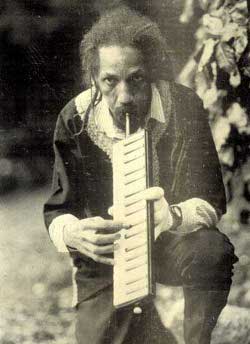 Augustus Pablo is not necessarily associated with digital output, and most of his most acclaimed material was produced during the 70’s. However, the four CD compilation 'Mystic World of Augustus Pablo: The Rockers Story' contains one disc with a bunch of great digital tunes in a fine Augustus Pablo style.

First up from Pressure Sounds is the 45s Credential Instrumental, A Java Instrumental and Armagiddeon (Drum Sound). All three complete with a version and available in late June.

The singles will luckily enough be followed by Pressure Sounds’ third Augustus Pablo installment titled 'Message Music'. This one is supposed to hit the streets in July.