Invasion Of The Mysteron Killer Sounds

Invasion Of The Mysteron Killer Sounds

Digital sounds of past, present and future.

Due for release on 16th of June, via Soul Jazz records, is a various 2CD / vinyl album compilation titled ‘Invasion Of The Mysteron Killer Sounds’. The album, though not entirely a true reggae album it does feature music from some of the radical, pioneering, electronic, scientific, 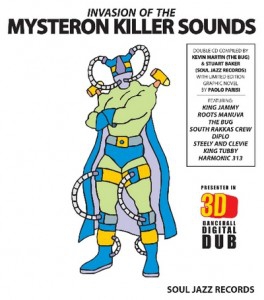 dub producers of the Jamaican digital dancehall revolution such as King Jammy, Steely and Clevie, Sly Dunbar, Prince Jazzbo, King Tubby, Dave Kelly and Firehouse Crew along with electronic and futurist artists of today Harmonic 313, Diplo, Roots Manuva, South Rakkas Crew and The Bug, who in collaboration with Stuart Baker of Soul Jazz Records has compiled this album.

These new digital producers have taken inspiration from these digital styles that exploded out of Kingston in the 1980s and blended them to create work that is contemporary, whether it is dubstep, acid, hip-hop, electronic but can still be linked back to what at the time was considered to be the revolutionary computer-based sounds that were coming out of Jamaica.

The whole thing sounds very interesting and exciting and I’m sure ‘Invasion of the Killer Mysteron Sounds’ will be a must for any fan of Digital, Dancehall, and Dub, so if you’d like to pre-order the album to be sure of getting all the goodies go here.

Tracklisting for the album is as follows: