Heartical is originally a French sound that started in 1999, and has since played all over the globe. They have clashed against, and juggled with, some of the biggest sounds in Europe and Jamaica, including Killamanjaro from Jamaica, Massive B from the U.S. and Supersonic from Germany.

In 2001 the crew launched their label aimed at releasing old school roots music. To date over 50 titles have been released on vinyl and digital download.

As a ten year celebration Heartical is now set to put out its first official compilation featuring an impressive line of artists. Most of them reggae legends like Johnny Osbourne, Little Roy and the late Sugar Minott and Alton Ellis, who sings Peaceful Valley over the Ministerio del Dub riddim, which must have been one of his last recordings. 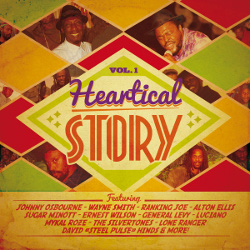 The compilation is a minor chord celebration in a foundation style. This is roots music as it was meant to be. Just listen to Lone Ranger in Original Style. It’s the chatting Ranger with his ribbiting and oinking against the riddim led by an apocalyptic organ.

Now available as digital download and on CD on June 6th.

'Heartical Story' shows that none of these foundational artists have lost their flow. They sound just as fresh in the 2000’s as they did in the 70’s and 80’s.