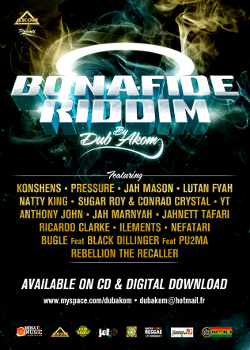 They must have got some great response, because now they have decided to release a Bonafide one riddim album with some major singers and singjays from the Caribbean, Africa and Europe.

But Dub Akom has also voiced some lesser known artists, and all of these nearly outshine the wider known ones. Bahamas-based singer Ricardo Clarke is in fine form with his gospel-tinged singing style. South African Jahnett Tafari is equally impressive.

The album features 15 vocal outings and one instrumental. All of these of the highest quality.

The Bonafide one riddim album hit the streets as digital download on June 7th and as CD on June 20th.