The Dour Festival held in Wallonia, Belgium from the 14th to 17th July 2011 is one Europe’s premier music festivals and last year saw more than 125000 people pass through its gates. 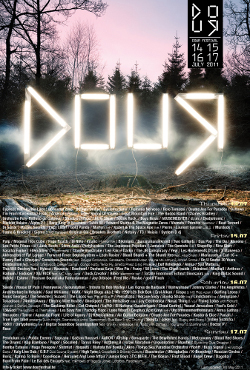 Its all encompassing musical diversity, across seven stages is similar to that of the world famous Glastonbury Festival in England and in 2009 it received the award for best European festival in the intermediate category where it was competing against the likes of Bilbao BBK Live (Espagne), Coke Live Music Festival (Poland), Couleur Café (Belgium), Melt! Festival (Germany), Paleo Festival Nyon (Switzerland), Pinkpop Classic (Netherlands), Spirit of Burgas (Bulgariia), Taubertal-Festival (Germany) and TMobile INmusic Festival (Croatia).

There is a strong reggae presence this year with Friday night featuring performances from Dutch sound system Forward Fever with Leah Rosier along with UK sound systems King Midas Sound, Blood Shanti & The Shanti Ites featuring Emmanuel I Joseph and Conscious Sounds with a collective of Dougie Conscious aka Dougie Wardrop, Sandeeno, Christine Miller, Wayne Mc Arthur & Afrikan Simba. There is also an appearance from Welsh "ragga metal" band Skindred, whose blend of metal, punk, and reggae from the disbandment of vocalist Benji Webbe's previous band, Dub War has been going since 1999.

On Sunday it’s the turn of Tarrus Riley, Anthony B, Israel Vibration and Groundation plus French outfit O.B.F Dub Sound System, DJ Hugo Freegow from Liège, Belgium and Kingston’s Busy Signal & HI Voltage Band. Busy is one of a new breed of dancehall artists and a member of The Alliance, founded by one of his heroes, Bounty Killer. He also has 3 studio albums behind him since his initial success with 'Step Out' in 2005 as well as a whole host of concerts, both in Jamaica and internationally.

Dour has a large camping ground, available from the 13th July, with plenty of amenities including WC, showers, running water, cooking areas, sanitary areas plus a bakery, shops, bars and all other types of vendors that can usually be found at these events. If you have eclectic musical tastes or just fancy something different then this could be the festival for you.