New riddim album from UK based studio and record label.

UK based studio and record label Reality Shock have just released the 'Free The World' riddim album which was recorded at the House Of Hits studio in Spanish Town, Jamaica. 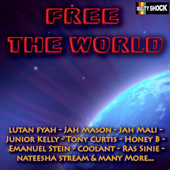 The riddim itself is in an original roots/steppers style and features drums by the legendary Leroy "Horsemouth" Wallace, star of the 1978 film "Rockers".  There are 15 vocal  cuts on the album from some of Jamaica's leading reggae artists, including Jah Mason, Junior Kelly, Lutan Fyah, Jah Mali, Tony Curtis & many more.

The album is available to download now at itunes with selected cuts due out on 12" later this year.