The first single from Anthony B's forthcoming album for IrieVibrations. 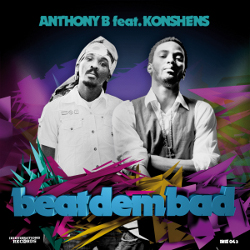 Having already sewn up an at least solid 2011 with the release of the big album from Luciano, 'Rub-A-Dub Market' and a nice set for the SweetBaby Riddim, outstanding Austrian imprint, IrieVibrations have turned their attentions to 2012 when they'll deal a full album for Reggae star Anthony B. The album, 'Freedom Fighter' is set to reach stores early in the year and they're already working with its infectious first single Beat Dem Bad, which features another favourite of the label, Konshens, alongside Anthony B.

Listeners can get their very first taste of Anthony B - 2K12 when Beat Dem Bad arrives in digital stores on July 1.