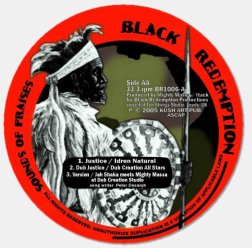 Mighty Massa productions are rare and their releases are always an awaited happening. Black Redemption label from New York releases a new heavy roots single with UK singer I Natural on vocals.

This 10'' features five cuts including Justice voiced by I Natural, an extended mix Idren Natural and Jah Shaka and three dubs mixed and produced by Mighty Massa alongside Jah Shaka as a player of instruments. Don’t waste time if you want to get it, there are only few copies available !