Another strong release from France. 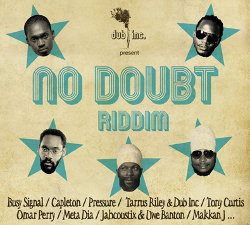 This tune has now formed the basis for a one-riddim album titled No Doubt with contributions from Capleton, Omar Perry and Pressure among others.

Worth noting is that Busy Signal also makes an appearance on this one drop riddim. It’s a somewhat rare appearance since he hasn’t voiced much material in that vein lately.

No Doubt riddim hits the streets as 7”, CD and digital download on October 11th.