Single release the from forthcoming 'I Volutionary Sounds' album. 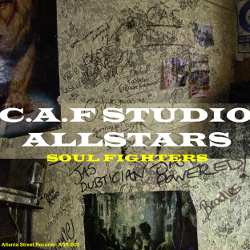 Not many people will be familiar with the name of C.A.F (Catch A Fire) Studios, but this small independent studio in the leafy suburb of Ponders End, Enfield, London, has been responsible for some of the most authentic sounding underground foundation reggae and dub of the past few years such as the Himperial Rockers album ‘New Dub Evolution’ released earlier this year.

Now the proprietor of this studio The Manor has put together an in house band C.A.F Studio Allstars, who are at this moment working on an album ‘I VOLUTIONARY SOUNDS’ and as a prelude to its release they are promoting the album with a single ‘Soul Fighters’ on the Sprinline Jamaica label via Atlanta Street Records which has a bit of a rockers feel to it and is available now to download at all leading stores.