Mongst I and I by Midnite

Mongst I and I by Midnite 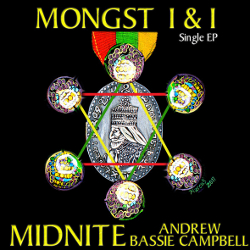 Hyper-productive Midnite from the Virgin Islands is set to release Mongst I&I, the brand new single from their upcoming album 'Kings Bell'.

The single will be accompanied by Midnite’s first ever music video, a video recorded on location in both Frederiksted, St. Croix, and Kingston, Jamaica.

Mongst I&I is based on a one drop riddim and is a digital-only release featuring the single, the music video, two remixes courtesy of Lustre Kings’ Andrew “Moon” Bain and SoundPonics, and a dub mix.

The album is mainly recorded at Tuff Gong Studios in Jamaica, with additional overdubs, vocal recording and mixing completed at I Grade’s studio in St. Croix.

Mongst I&I and 'Kings Bell' is released through I Grade Records and Andrew Bassie Records on September 27th and November 1st respectively.