Four 7" heavyweight vinyl records that include some rare dubplates.

Dub Store is at it again with another batch of King Jammy dubplate specials all taken from the original master tapes. 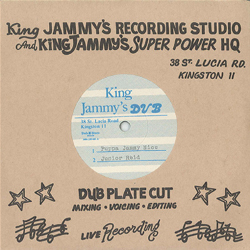 The Japanese company have just released four 7” heavyweight vinyl records that include some rare dubplate specials originally recorded for Jammy’s Super Power soundsystem by artists such as Pad Anthony, Little John, Anthony Malvo, Johnny Osbourne and Thiller U, who recorded their songs at King Jammys Recording Studio, plus unreleased dubplate recordings by Junior Reid and US soul group the Chilites. These dubplates were then played against the likes of Black Scorpio, Killamanjaro, Downbeat, African Symbol and other soundsystems who tried to test Jammys Super Power, at various sound clashes and go some way to show why the Prince became a King.