The Cool and Deadly Riddim

The Cool and Deadly Riddim

The latest from Kemar Flava McGregor. 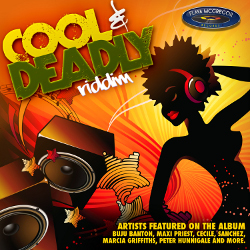 Finally, after several billions of years, the leading Reggae producer in the world, Kemar 'Flava' McGregor has delivered his latest composition and while, truly, nothing could be worth that kind of a wait, the aptly titled Cool & Deadly Riddim once again reaffirms McGregor's grand stature in the music - It is absolutely excellent. The smooth and melodious set finds the producer going in a very familiar direction as it subsequently gives birth to modern Lover's Rock winners from a variety of interesting sources.

Big Jamaican names such as Marcia Griffiths, Buju Banton [alongside Jovi Rockwell], the incomparable Sanchez and even Ce'Cile feature on the riddim which also includes a roster of full on legendary vocalists from out of the UK. Peter Hunnigale, Janet Kay, Carroll Thompson and Maxi Priest headline a group which also includes the delightfully Jazzy Adele Harley. Sadiki and Kashief & Nikesha Lindo round out of the very impressive lineup of stellar names on the riddim.

Surely you've waited entirely too damn long for a new riddim from the genre's finest, but the wait is over. The Cool & Deadly Riddim from Kemar McGregor is currently available on etailers worldwide as well as on FlavaMcGregor.com.