The label is now set to venture into the reggae vinyl singles arena and has scheduled two limited edition 12” releases from Joshua Moses. 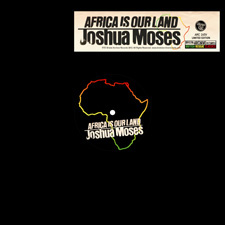 The first 12” Africa (Is Our Land) was originally released in 1978 on the More Cut label and produced by Dennis Bovell. It is now acknowledged as a classic slice of UK roots and on the rare occasion’s copies surface they regularly fetch prices over £100. The vocal cut was included on 'The Bristol Reggae Explosion 1978-1983', and following numerous requests the label has decided to issue it in its original format along with the original dub mix.

The second 12” from Joshua Moses is Rise Up, and is another strong roots outing. Until it’s inclusion on 'The Bristol Reggae Explosion Volume 2' it had remained unissued and unknown, and the B side of this 12” is the previously unreleased dub version

Both 12” are available on 20 February and limited to 500 copies each at www.bristolarchiverecords.com.