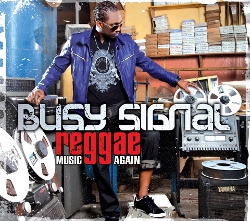 Each of the album’s 14 tracks is described as “celebrating the uplifting spirit and tightly woven grooves that epitomize Jamaica’s signature rhythm”. And the album shows both Busy Signal’s spiritual side and his sensual style, such as the first single Come Over (Missing You).

“This album will shock many people who are used to me just as a deejay,” declares Busy Signal in a press release, and continues:

“But it shows my growth, versatility and the recognition of reggae as the origin of dancehall music. Being a Jamaican, I feel like it is my duty to highlight and contribute to reggae music, and with the encouragement of my management and musicians who played on this record, including Dean Fraser, it all came together. This album is like a renaissance for me, a rebirth - reggae style.”

The one drop rhythms on 'Reggae Music Again' were created by some of Jamaica’s most acclaimed musicians, including Robbie Lyn, Dean Fraser and Kirk Bennett, and were recorded live at Kingston’s legendary Tuff Gong studios.

“Reggae has more substance and longevity and Busy is one of those rare artists of his generation who can sing as well as deejay on authentic reggae rhythms.”

In addition to the full-length album, VP Records will release a vinyl companion piece, entitled 'Reggae Music Dubb’n Again', available April 17th, special for Record Store Day on April 21st. The exclusive LP will feature extended dub mixes for six of the album’s songs, which are all produced and engineered by Shane Brown and his legendary father Errol Brown.