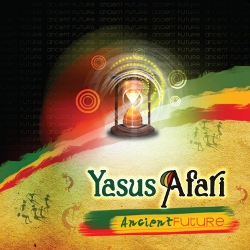 It features young and emerging artists and producers as well as iconic veterans from Jamaica, New Zealand and the UK, including Toots Hibbert, Bobby Digital, Dean Fraser, King Kapisi and Benjamin Zephaniah.

The press release describes 'Ancient Future' as a “decidedly eclectic mix of textures, sounds and feel” and that is has a “rootsy yet cosmopolitan vibe”.