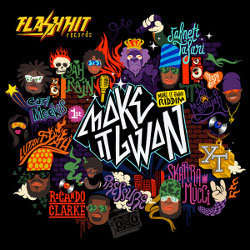 Flash Hit Records from South France has just released their first production – the Make it Gwan riddim. A taste of the riddim was featured on Skarra Mucci’s album 'Return of the Raggamuffin' released in April.

The newly released one riddim compilation collects 15 cuts in a digital roots style from artists such as Lutan Fyah, Carl Meeks, Pressure Busspipe and YT, whose What Dem Sellin also will be available on his upcoming album 'Revolution Time'.