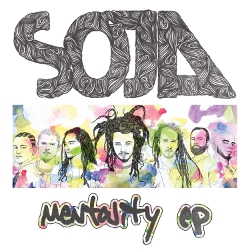 U.S. reggae giants SOJA has just released in europe their first digital EP in order to make the ball rolling before the European release of their fourth full-length album 'Strength to Survive', an album produced by John Alagia and inspired by Bob Marley’s 'Survival'. This EP and the album are already available in USA.

"That's the greatest reggae album ever made", states front man Jacob Hemphill in a press release, and explains:

"It has the best bass lines and the best lyrics ever heard on one record. Marley wrote it after he went to Africa. I was 13 or 14 when I listened to it for the first time and it triggered all these long-forgotten memories of when I lived in Africa as a kid. My dad was an IMF representative in Liberia in the late 80's. I remember when the coup first started. My family had to hide in these iron bathtubs for three days because the military was shooting at everything. I was seven and that was one of my first memories. So Africa was always a big part of our lives. It defined our family, in a way. Music came right after that, so, for me, music was always tied to Africa and music was always something powerful.”

The EP collects six tunes – Mentality, Not Done Yet, the acoustic She Still Loves Me and three versions of Everything Changes – and is currently available on digital platforms. The song Mentality is also available as free download here.