King Solomon's Worthy To Be Praised

King Solomon's Worthy To Be Praised

Strong EP from Trinidad's next big thing in Reggae. 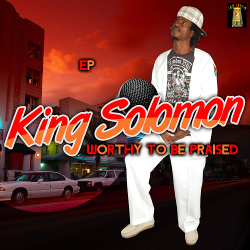 JahLight Records and good old common sense are suggesting that you check out 'Worthy To Be Praised', the debut EP from one of the freshest new talents from out of Trinidad, King Solomon. The set features five strong tracks which are sure to make a big introduction and first impression of the artist on to the rest of the Reggae listening world which hasn't been fortunate enough to come across his work as of yet. Featured are the fittingly titled JahLight, Living In Love, I Know, Things That We Do and the title track which is being prepared as the EP's first single.

'Worthy To Be Praised' is a big tune and highlights the project nanmed after it, but also pay a special attention to both JahLight and I Know. King Solomon seems poised and now positioned to join the likes of Queen Omega, Khari Kill, Isasha and Marlon Asher as exceptional talents from out of Trinidad. Want to know why? Be sure to pick up his new EP, 'Worthy To Be Praised' from JahLight Records when it reached etailers around the world on August 1.