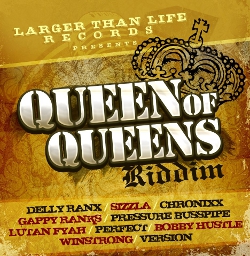 U.S. based Larger Than Life Records have recently put out their second riddim, and the follow-up to their debut production Life After Lifetime riddim released in February 2012.

The latest one drop installment is titled Queen of Queens riddim and is a collaborative effort with veteran producer and artist Delly Ranx and Pure Music Productions.

The nine cuts are voiced by top international singers, deejays and players of instruments, including established names as well as bright stars on the rise such as Chronixx, Lutan Fyah, Perfect, Sizzla and Gappy Ranks along with Dean Fraser on saxophone and Nambo Robinson on trombone.

The Queen of Queens riddim is now available on digital platforms worldwide.