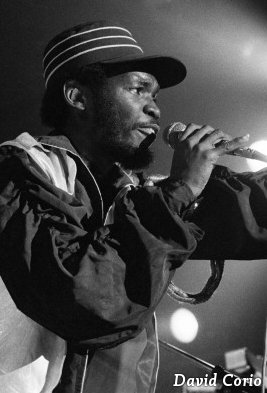 The local entertainment industry has lost one of its members with the passing of former lead singer of Chalice, Trevor Roper. He passed away at the age of fifty nine (59) on Wednesday January 2, 2013 in Chicago. Reports are that the singer had been battling cancer, which he eventually succumbed to.

Formed in the 1980’s Chalice was one of the leading groups of its time, as it possessed excellent musicians and the superb vocal range of Trevor Roper who was one of the original members. The group comprised the talent of Wayne Armond (guitar/vocalist), Desi Jones (drums), Michael Wallace, (Keyboards), Robbie Peart (singer/songwriter), Alla Lloyd (keyboard) and Keith Francis (bass). Roper was the lead vocalist on popular hits such as Revival Time, Good to be There, Stew Peas and the distinctive hit, Dancehall Philharmonic. These songs received much airplay at the height of their popularity, but it was the music videos which made the faces of the band and Roper singing lead, familiar to the masses. In 1990 the group created history by touring on Mexico’s first Sunsplash.

A major change took place in 1992 when drummer Phanso Wilson who replaced Desi Jones as the group’s second drummer and Trevor Roper migrated to the United States. Roper was then replaced by Dean Stephens and Wilson by Wayne ‘C Sharp’ Clarke. In remembering his former band mate, Wayne Armond stated, “because of the closeness of Chalice back then were  all one family and despite our differences in the past we still remained as one family”.

In addition to his numerous fans and friends within and without the industry, he leaves six children and eight grandchildren to mourn his loss.