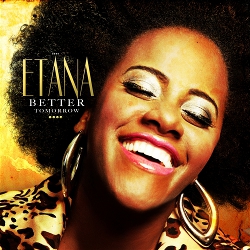 On February 26 Jamaican singer and songwriter Etana drops her third album 'Better Tomorrow', and according to a press release it’s her fiercest and most thought-provoking material to date. Just a few months ago Etana had her first child and it’s stated in the press release that this has given her a newfound clarity and a fresh perspective.

'Better Tomorrow' was recorded at the legendary Tuff Gong Studio’s in Kingston, Jamaica, and the production was helmed by Shane C. Brown, among other things known for being Busy Signal’s manager and responsible for his latest and highly praised album 'Reggae Music Again'.