The Sound ‘n’ Pressure label was established in the UK in the early 90’s by three digital reggae aficionados. The label’s debut release was an underground hit titled Warm the Nation. Three more 12” releases followed. A fifth was recorded, but never released. Instead it ended up as dubplate being played by Aba Shanti. 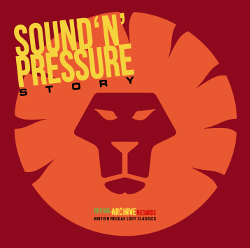 The four 12” are today sought after by collectors, but hard to find. Now all of the music issued on the label – including the exclusive Aba Shanti dubplate and an unreleased track made for a short film – will be readily available, remastered to perfection, on the upcoming compilation 'Sound ‘n’ Pressure Story'.

The compilation boasts 13 tracks by artists such as Fish + Goat and Sufferah, Versatile Creations, All Nation Rockers, Roots Lepkie and Freddie Carr.

It comes with sleeve notes filling in the background to the label and will be available on CD, limited edition vinyl and as a digital download on March 11th.