Alborosie is ready to Sound The System

Alborosie is ready to Sound The System

After the eclecticism of third vocal solo album '2 Times Revolution', Sicilian reggae star Alborosie has been signposting a return to roots and culture. 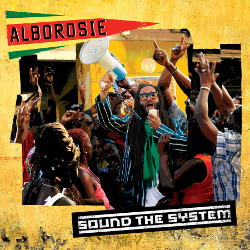 This summer his European followers can find out if new long-playing release 'Sound The System' is it.

Bearing a striking cover photograph of Albo in a striped jacket shouting to a crowd through a megaphone, 'Sound The System' will be distributed by Greensleeves.

This week Alborosie tweeted “Who ready fi di new album?? I am ready to release some new music to di world!!”

The finished project descends on June 17th as a digital download.

A 16 track CD and a 10 track LP will hit the streets on July 1st in the United Kingdom and France and on July 4th for Germany, Austria, Switzerland and the rest of Europe.

The track-listing can be seen below: