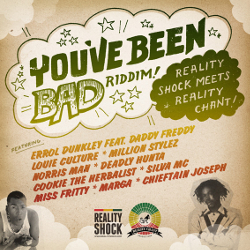 They’ve co-produced a new rhythm based on Errol Dunkley’s 1982 side You’ve Been Bad at the behest of Mr Dunkley himself.

Calcott describes the results as "No BBQ reggae" in reference to the commercial, "sunshine reggae" styles prevalent in New Zealand.

You've Been Bad offers musical chastisement as a digital album out at the end of May and on 12” in June.