Germany’s famed reggae festival asks you to Free Your Mind.

Rightly-or-wrongly the biggest reggae story and PR coup of the last year, reincarnated rapper Snoop Lion has top billing. He shares it with German reggae’s favourite sons Gentleman and Patrice.

Commander of one of the previous edition’s largest crowds, Alborosie returns to the festival with a new album at the ready. Also touring a recent record is the re-united family quintet Morgan Heritage.

Dancehall business will be represented by Busy Signal and Popcaan. Their island’s singing talent is showcased by Tarrus Riley and Romain Virgo.

Followers of Jamaica’s new generation will be excited to catch Chronixx - back in Europe after his first tour. Witnesses of Protoje’s unrehearsed Summerjam 2012 set with France’s Dub Akom band will be intrigued to see him return this time with his own players the Indiggnation.

Sadly Jamaican veteran Ken Boothe – whose 1970 Phil Pratt helmed hit Artibella was sampled by Snoop and his producers Major Lazer - has cancelled his tour at the last minute. However, he is being replaced by fellow legend Max Romeo.

Check the full lineup on the poster below. And remember, despite two main stages and a dancehall arena packed with performers, the lake ringed island festival location is the real star. 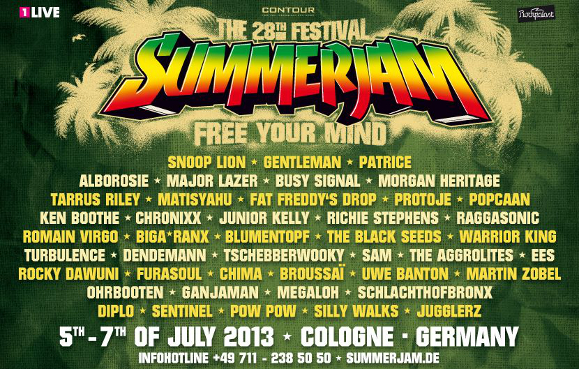