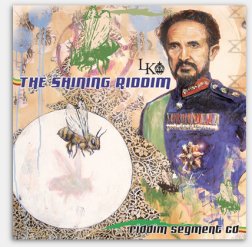 New CD and 7’ releases this month by Lustre Kings Productions. The label presents The Shining Riddim that will be available on cd and as single in mid February. 17 artists from Virgin Islands and Jamaica on a roots riddim produced by Digital Ancient and King Corrin, including great vocal cuts from Pressure, Nyorah, Vaughn Benjamin, I Lue, Jah Mason, Lutan Fyah, Brother Culture and Al Pancho.

Originally recorded in 2004 when Lustre Kings was working on Lutan Fyah’ Time and Place album for the song Fire In The Barn, the Californian label continued to record artists on it through the year and releases today the complete serie.

A classic Lustre Kings production with special guest Bongo Herman on percussions that should be one of their last riddim release as the label will now focus on solo artists albums and compilations.