The first edition of Dub Camp festival will take place in early July. 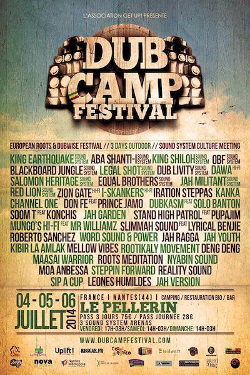 The first edition of Dub Camp festival will take place in early July. For the first time the French Association Get Up has organized a festival dedicated to the culture of sound system. Dub Camp is to be held near the city of Nantes at Le Pellerin.

This outdoor festival will take place over 3 days, from the 4th of July to the 6th with no less than 14 sound systems on site.

There will also be many French dubmakers and many collectives of the French dub scene: I-Skankers, Kanka, Dawa Hifi, Stand High Patrol feat Pupajim, OBF.

There will be three outdoor areas with the aforementioned 14 sounds. A festival with a line-up that promises to be explosive, to the soundtrack of only 100% homemade Sound System.