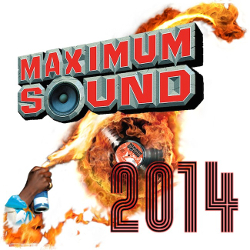 Included are also no less than two exclusive tracks. Both Vybz Kartel’s Ghetto Youth Make It In Life (2k14 Re-Fix) and up and coming dancehall sensation Masicka’s After Life have never been released before in any format.

Cuts of all of Maximum Sound’s most recent riddims are represented – from Jah Blessings, King Tubby’s Dub Plate Style and Imperial Crown to Tin Mackerel, Mightiest and Number One Station.

And as usual with Maximum Sound – all tracks are signed and sealed by the mighty Frenchie and were recorded between Kingston and London.

Maximum Sound 2014 will only be available via digital download.