A Global Reggae Tribute to The Beatles.

Argentinian reggae musician and producer Hernan ”Camel” Sforzini loves The Beatles so much that he has put together no less than two reggae tribute albums in their honour.

“I love The Beatles,” states Hernan Sforzini, and continues: 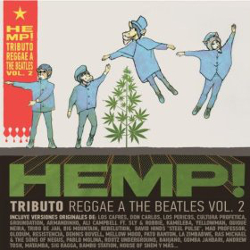 “When I discovered Revolver I became a serious listener of their musical legacy and I asked myself ‘why not get my two passions, Beatles and reggae, together?’”.

“For Hemp! I took a world map and I explored every country’s reggae history. I listened to a lot of bands to select the ones that I considered interesting and invited them to join the project,” says Hernan Sforzini, and adds:

“On this album I have put together reggae legends well-known all over the world with artists that are growing, new school bands and artists like Mellow Mood, Nairobi Dub, Dubies, Sebastian Sturm, Ras Attitude and Matamba,” says Hernan Sforzini.

Among the more well-known acts are artists and bands like Groundation, Dennis Bovell, Yellowman, Prezident Brown, Ras Michael, Don Carlos, Danakil, Mad Professor,The Aggrolites and Sly & Robbie. But putting the project together was not easy.

“It was Jah’s work and it took three years working full time. I express my love and gratitude to all the artists that are included and made this project possible,” concludes Hernan Sforzini.

Hemp! Reggae Tribute to The Beatles Vol. II comes as triple CD and is also available as digital download. It was recently awarded Reggae Album of the Year in Latin America’s Pelagatos Awards. All profits generated from the album will be used for the construction of a water well for a soup kitchen in the Shipibo children community in Pucallpa, Peru.

Tags: Hemp!, Tribute to the Beatles