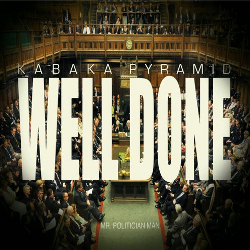 After many hits in 2014 and the mixtape The Lyricist, singjay Kabaka Pyramid is back with the new single Well Done [Mr Politician Man].

Kabaka uses sarcasm to speak directly to the corrupted politicians of the world. Instead of the usual lashing out expected he instead "congratulates" those who have abused their leadership for the problems they have caused the people of Jamaica and the situation the country finds itself in after over 50 years of independence :