The Lost Books of Ska Vol. 1

The Lost Books of Ska Vol. 1 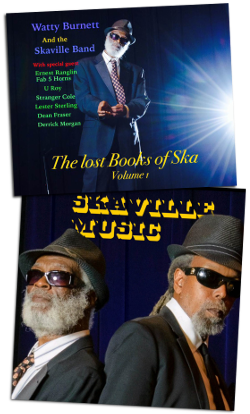 Anyone who moves in New York City music circles should be aware of John Allen, the multi-instrumentalist who played on some of Shaggy's biggest hits.

Allen's latest project is a ska album known as The Lost Books of Ska Vol. 1 which is being produced by Skaville Music, a label he operates with singer Watty Burnett of The Congos.

The album, which Allen expects to be released in 2016, is inspired by the The Skatalites, whom he considers the "greatest band ever formed in Jamaica".

The 59-year-old Allen recalls his relationship with two of the band's original members as a teenager living in east Kingston.

"Always loved ska but my main motivator was (saxophonist) Roland Alphanso who was like a mentor  to me, and (fellow saxophonist) Tommy McCook who when I lived on Ocean View Avenue, use to live on Slipdock Road. We use to meet at Bournemouth Beach early mornings where I listen to him rehearse while I swim before going to school," said Allen.

Allen composed and arranged the songs on The Lost Books of Ska Vol. 1. Saxophonist Lester Sterling, the only surviving original Skatalite, and jazz guitarist Ernest Ranglin, who collaborated regularly with the band, played on the album.

After moving to the US, Allen joined Monyaka, a band that had a hit song with Go Deh Yaka in the early 1980s, and was briefly signed to A&M Records.

The song was recorded at HC&F Recording Studio in Long Island, owned by Philip Smart.
Allen made his name as a session musician at Smart's complex, playing hits like Oh Carolina and Boombastic by Shaggy, Dirtsman's Hot This Year and Cabin Stabbin' by Super Cat.
Old Fashion Way, featuring Ranglin is projected as The Lost Books of Ska Vol. 1's lead single.