Straight To The point by Empress Ayeola

Straight To The point by Empress Ayeola

"Growing up in Jamaica taught I survival skills!"

Though she was born in the United Kingdom, singer Empress Ayeola was raised in rural Jamaica, where her parents roots run deep. 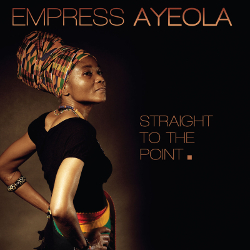 She recalls those idyllic years on Straight To The point, her second album, which was recently released.

Empress Ayeola re-settled in the UK in the 1980s and has made a name there and Europe as a roots artiste. But it is her time in Manchester parish in central Jamaica that holds special memories.

Songs like Reggae Lock Di World, Country Life and Beautiful Jamaica, reflect on her Jamaican experience while Rastafari Grow Mi, is homage to the religion she has practiced for 20 years.

Straight To The Point was scheduled for release two years ago, but those plans were shelved after a change in Empress Ayeola's management. The official release comes eight years after her debut album Isat Innat, a spiritual set that won her fans in the UK, Europe and parts of the United States.

She believes she has matured as an artiste and a person during the break between albums. "Travelling to different countries, meeting people of all races and so-called classes has taught I more tolerance of others and also inspires me in experiencing different cultures," she said.

"As for music, Emperor Haile Selassie I and Empress Menen I has given I more motivation to deliver the meditation to inspire, nurture and teach others with the little knowledge that I have."