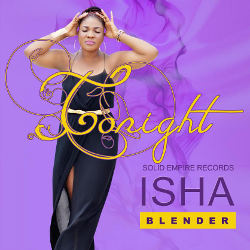 Spiritual roots singer Everton Blender's – probably best known for his recordings in the 90s for producer Richard "Bello" Bell and his Star Trail imprint – daughter Isha Blender has unveiled her debut single Tonight, a silky track recorded over a rendition of the classic Queen of the Minstrel riddim.

The songs is produced by UK's House Solid Empire and is currently enjoying local and international airplay.