Since he was sentenced, there has been increased demand for Vybz Kartel's music and book.

There is just no keeping Vybz Kartel out of the news in Jamaica. Last week when a former government minister suggested his songs be banned from radio, his fans reacted angrily.

The sustained controversies surrounding the imprisoned deejay has spurred interest in his music and merchandise. 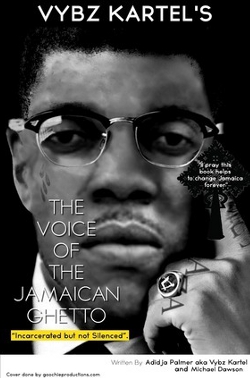 His book, The Voice of The Jamaican Ghetto, is even more popular five years after its release.

Kartel co-wrote the tome with Michael Dawson, a Jamaican businessman who lives in South Florida.

Keecha Gooch is a director at Whirlwind International Group, a company that promotes Kartel merchandise. She says 'The Voice' appeals to diverse demographics.

"The book is being bought by mainly people in academia, college-aged students and young adults," Gooch reports.

Released two years before Kartel was sentenced to life in prison for murder, The Voice of The Jamaican Ghetto contains chapters based on 10 of his songs.

It is considered by some academics as a manifesto offering solutions to Jamaica's crime and economic challenges.

According to Gooch, that is what makes The Voice of The Jamaican Ghetto such an appealing product.

"From the feedback we have gotten, the popularity of the book stems from the fact that it is the first book that we know of that challenges the government, mainstream media, politicians and even the education system from a 'street' perspective. It cites statistics, historical inaccuracies and unearths facts or incidents in our history that are swept under the rug or seldom discussed to protect the status quo," she said.

Gooch added that because of Kartel's "legal situation", Whirlwind International is unable to disclose sales figures for the book.

Since he was sentenced, there has been increased demand for Vybz Kartel's music.

There are allegations he has been allowed to record while incarcerated, prompting politician Lisa Hanna to call for the banning of his songs.

Some of those 'new' songs have topped charts in Jamaica and the United States.