The Bad Boys of Reggae will celebrate their 50th anniversary in 2018. 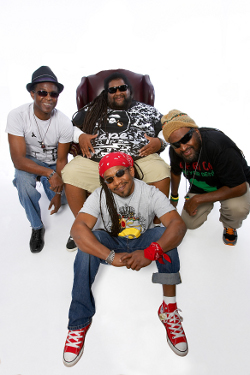 Most days when they're not touring, Roger and Ian Lewis of Inner Circle can be found at the band's spacious dual complex in north Miami.

Though the biggest names in pop music (Janet Jackson, Mariah Carey, P Diddy and Pitbull) have recorded at their Circle House studio, the brothers maintain a distinct Jamaican identity.

They co-founded Inner Circle 49 years ago in Kingston, Jamaica's capital, and are preparing to celebrate their golden anniversary in 2018.

"It's a great feeling, a lotta the people we came up with are either dead or give up the business, so we have a lot to be thankful for," said Ian Lewis.

Ian, 63, is the band's bass player and two years younger than Roger who plays guitar. They remain Inner Circle's backbone after years of personnel changes.

One 'change' was tragic. In April, 1980 they lost charismatic lead singer Jacob Miller in an auto accident at age 27.

Miller was a standard-bearer of the shortlived Rockers movement. He led Inner Circle on hits like Tenement Yard, Forward Ever, Backward Never and Disciplined Child.

Inevitably, Miller's legacy will be part of Inner Circle's 50th anniversary celebrations. A stage musical, Tenement Yard, is scheduled to open in May next year to mark his 65th birthday.

A free concert at Emancipation Park in Kingston is also scheduled for that period. A book and documentary on Inner Circle are in the works.

They also played on The Wailers' classic Stir it Up.

In the early 1990s, the Lewis tandem fashioned a remarkable comeback with the hit songs Sweat and Bad Boys. They won a Grammy Award in 1993 for Best Reggae Album.

Last year, their extensive world tour saw them playing to over one million fans.

But Ian Lewis points out that turning 50 is not just about Inner Circle. They hope to get Jamaica's government interested in establishing a Reggae Hall of Fame where the unheralded will get their due.

"Wi have a lotta people out there who are forgotten an' dats not right. Many of them have passed on but their contribution should still be recognised," said Ian Lewis.