Bob and Marcia live album at Razor's Palace in Florida.

Two of the true legends of reggae, Bob Andy and Marcia Griffiths made a formidable team in the 1960s and early 1970s. They recorded a number of hit songs for Clement 'Coxson' Dodd and Harry 'Harry J' Johnson. 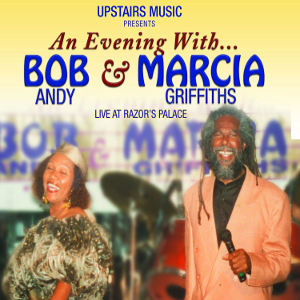 In the summer of 1995, Danny Breakenridge got the duo together for a show at Razor's Palace in Fort Lauderdale, Florida. It was a sold-out affair that is revisited on An Evening With ... Bob Andy & Marcia Griffiths, a double live album produced by Breakenridge's Upstairs Music.

The 24-song set was released on May 24 and is distributed in the United States by VP Records. It has 24 songs that are a rocksteady and roots-reggae lover's dream.

Razor's Palace was owned by Donovan 'Razor' Ruddock, a Jamaica-born, Canada-raised heavyweight boxer who fought twice for that title against Mike Tyson during the 1990s.

Breakenridge was also promoter of the show which took place during a rocksteady revival in Jamaica and parts of North America. Andy and Griffiths were among its leading players. An Evening With ... Bob Andy & Marcia Griffiths hears the artistes performing solo before sharing their classic duets.

Stepping Outa Babylon, Mark My Word and Truly are some of the songs Griffiths performed. Andy does Too Experienced, Sun Shines For Me and I've Got to Go Back Home. Together, they performed Really Together and Young, Gifted and Black.