One Love Peace Concert held 40 years ago on April 22th in Kingston at The National Stadium.

Kingston was a city on edge in 1978. Indeed, the Jamaica capital had been under political siege for much of the 1970s.

The One Love Peace Concert, held on April 22 that year, was supposed to bring stability to a country torn apart along ideological lines.

A landmark event, this April marks it's 40th anniversary. 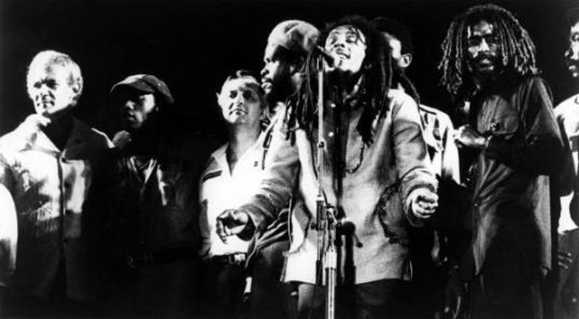 Tommy Cowan, who produced the show, recalled it's magnitude. "I don't remember the source, but it's rated among the top 10 rock concerts which speaks for itself," he said.

Supporters of prime minister Michael Manley's socialist policies saw him as a Third World hero in the mould of Cuban president Fidel Castro. His detractors, led by the conservative opposition leader Edward Seaga, considered Manley a danger to democracy in the Caribbean.

Manley and Seaga were brought together on stage by Bob Marley, a symbolic moment as iconic as Hendrix burning his guitar at the Monterey Pop Festival, or John and Yoko's lay-in. It was Marley's first major show in just over a year. He had moved to England in December, 1976 after being shot by gunmen st his Kingston home. As fighting between Manley and Seaga backers escalated in 1977, enforcers from both factions reached out to Marley who agreed to headline a peace concert at the National Stadium in Kingston.

Claudius Massop, a Seaga supporter, Cowan, an impresario with a growing reputation, to produce the event which would feature other top acts such as Peter Tosh, Dennis Brown, The Mighty Diamonds, Jacob Miller and Inner Circle and Ras Michael and The Sons of Negus. While the image of Marley holding Manley and Seaga's hands aloft is the most memorable of the One Love Peace Concert, Tosh's profane performance in which he blasted Jamaica's ruling class for neglecting the poor, also stood out. Miller delivered a riveting set in which he called up Massop and rival gang leaders in a show of unity. 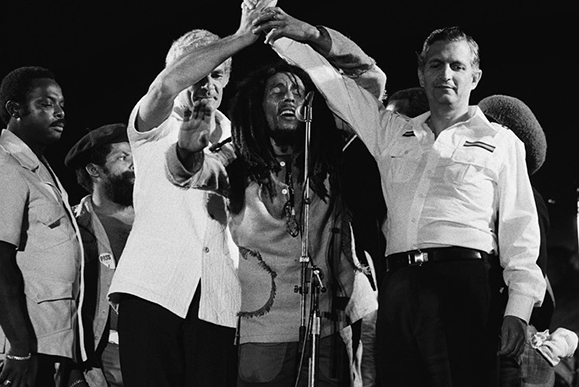 Within three years, some of the leading players in the show died. Massop was controversially killed by police in Kingston in February, 1979. He was only 30. Miller died in an auto accident in March, 1980 at age 27; and Marley succumbed to cancer in May, 1981 at age 36. The gang violence the concert was held to suppress, continued to rage leading up to the general election in October, 1980, won in landslide fashion by Seaga's Jamaica Labour Party. Over 800 persons were murdered that year. Manley, who died in 1997 at age 73, once described the One Love Peace Concert as a honourable concept with unrealistic expectations. "Poor Bob, he thought a handshake would change everything," he said.