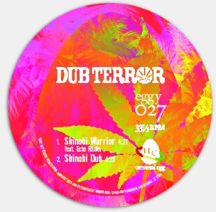 After his first 10" release Technology on Universal Egg Records, dub producer Dub Terror comes with the Shinobi EP, a 4 tracks single release between roots and dubstep vibrancies. This second 10’ features a nice vocal cut by Echo Ranks on a roots digital riddim while the flip side includes a dubstep track voiced by female singer Warrior Queen.

Due out on 9th of June on Zion Train’s label.