Forward Music By Meta and The Cornerstones

Forward Music By Meta and The Cornerstones

Forward Music, a new roots release from Senegal via New York by Meta and The Cornerstones. 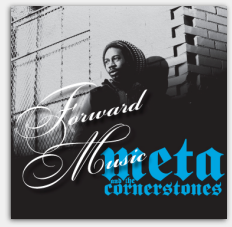 A new roots reggae album out of USA with the release of Forward Music by Meta and The Cornerstones. This Brooklyn based band led by Meta Dia on vocals, presents a 13 tracks roots album independently produced, available on 54 Soundz label.

The soulful singer native from Senegal started to perform at the age of 14 on hip hop stages in Dakar. In 2002, he moved to New York and collaborated with artists such as Sean Blackman and hip hop pioneer Toni Blackman. Six years later, alongside 5 musicians, he delivers in French, English, Wolof and Fulani, positive and fresh rootsy songs (Somewhere in Africa, Corner Stone, Question, Knocking On Your Door). To note that the crew is currently on tour in USA to support the album.