Yes We Can is due out on November 4th. Featuring Shabba Ranks, Prezident Brown and more. 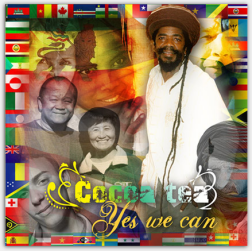 Is Cocoa Tea’s new album a political one ? Not really. Rather it is an appeal for unity. After releasing the hit Barack Obama, the Jamaican veteran returns with Yes We Can, his new response to the previously released single. Both songs will be featured on his forthcoming album due out on November 4th, on the same day as the US elections.

The new effort produced by the singer himself for his own label Roaring Lion and digitally released by Zojak World Wide, features productions from Bobby Digital as well as Cocoa Tea’s own ones. It’s a 14 tracks set including several combinations with Shabba Ranks, Prezident Brown, Marcia Griffiths, Cutty Ranks and El General. We found two covers of reggae classics : Smiling Face by John Holt and I May Never by Horace Andy. Musicwise, it features some foundations as Dean Fraser and the mighty Firehouse band. From modern roots to more dancehall reggae riddims, ‘Sweet Sweet Cocoa Tea’ keep on delivering his conscious and unity lyrics, and proves one more time that he’s still one of the kings of lover tunes.