A Priceless EP for Foundation Sound

A Priceless EP for Foundation Sound 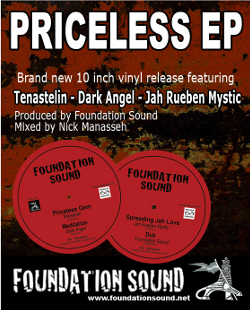 For their new release, the "Priceless EP", Norwich (East of England) based Foundation Sound crew teamed up once again with producer Nick Manasseh and the singers Dark Angel and Jah Rueben Mystic. They also voiced Tena Stelin over their Pricesless riddim. The result is a new 10’’ inna modern roots and uk dub style featuring three great vocals and a dub version. As usual, the production is quality and original. Strictly conscious and roots tunes ! Available from January 4th.

Foundation Sound was originally setup in 1981 by Tony Roots, after spending time in Jamaica and selecting on tour with Joseph Hill and the mighty Culture. In the 1980's and early 90's Foundation promoted many dances around the UK including shows with Culture, The Wailers, Eek A Mouse, Tappa Zukie and The Twinkle Brothers. In the Late 90's Tony Roots linked up with a crew of youths including his son D-Boy, Pappa Barn, Jethdub, Eddy Foundation & Guvnor who rebuilt the sound system. From those times Foundation has evolved into a studio, record label & sound system that continues to work with many different UK, JA and international artists & sound systems both live in session and in the studio.