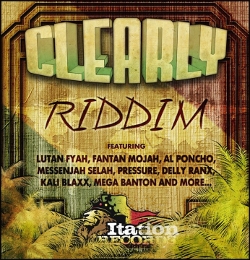 Following up from last years Delly Ranx' 'Good Profile' and this magazines Roots Riddim of the Year award-winning 'World Go Round Riddim' in 2008, Itation records have announced the upcoming release of the brand new Clearly Riddim.

For this new one drop, Itation are teaming up once more with French production team Tune In Crew for a partnership that they hope will once again become a chart topper.

Ahead of its official album release, scheduled for this month, the first tracks to hit the streets will be from one of Jamaica's rising stars Kali Blaxx with Nah Trust Dem plus Be What You Want To Be from Virgin Islander Pressure.