Best Of The Best Festival 2010

Best Of The Best Festival 2010 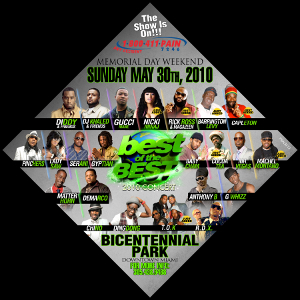 On Sunday, May 30th at the Bicentennial Park (1075 Biscayne Blvd.) in downtown Miami, FL an all-star lineup of performers from the worlds of Reggae, Soca, Pop, Caribbean, and Hip Hop music are set to hit the stage once again for the sixth annual Best of the Best International Music Festival. Some of the artists already confirmed for this year’s event include Barrington Levy, Lady Saw, Pinchers, Gyptian, Cocoa Tea, Anthony B, Capleton, DJ Khaled, Rick Ross, and Jabba, with the 10-hour proceedings being hosted by Diddy. Gates open promptly at 1:00pm with the first performance on stage beginning at 1:30 pm.

It sounds like it will be a full on weekend in the city with other events taking place over the weekend including an official welcome party at the Opium nightclub on Friday 28th and a pool party at the Deauville Beach Resort on the Saturday 29th.