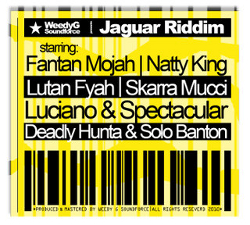 Big and bad Swiss label, Weedy G Soundforce, has gained quite the reputation for itself over the past few years with big riddim releases such as the The Maestro, The Bubbler and The Best Trick; and now they bring forth their latest creation, the very strong Jaguar Riddim. This release very much follows consistently in Weedy G's style of making the big and colourful types of Roots Reggae riddims and surely their fans will be more than just satisfied with Jaguar.

Weedy G may score a whole heap of new fans as well with some of the big artists featuring here. The Jaguar Riddim boasts very strong efforts from the likes of Jamaican stars Lutan Fyah, Fantan Mojah, Natty King and a big combination featuring Luciano alongside Spectacular. Joining them are the UK based veterans Deadly Hunta and Solo Banton in a combination, as well as Jamaican upstart Skarra Mucci who has reportedly been heating up Europe.

The Jaguar Riddim from Weedy G Soundforce is set to release on 7" single and digitally in mid-June.