Listen to tracks from his new album out this month.

The yearning brogue of ex-Gladiator Clinton Fearon has been ringing out from Seattle these past 23 years, where he's been honing his unique pastoral roots sound with his Boogie Brown band. Now he is back with his eighth solo album, 'Mi Deh Yah', released in Europe by Makasound’s new music arm Makafresh, which promises to be a delight to his fans. 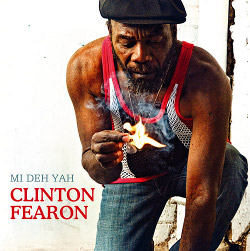 Self-produced and recorded at Aleph Studio, Seattle, 'Mi Deh Yah' is another pleasantly folksy yet contemporary take on cultural music in the mode of previous albums 'Give and Take' (2004) and 'Vision' (2006). The 14 songs are backed by a slightly altered Boogie Brown band line-up, with Clinton returning to his Gladiators role on bass as well as playing many other instruments. According to Fearon’s wife, Catherine, “He never spent so much time in the studio for an album before.”

Like Winston McAnuff in France, Fearon is one of a select group of elder statesmen of roots reggae who are still knocking out crucial releases prolifically. We invite you to listen to Mi Deh Yah and Working For The Man from 'Mi Deh Yah', due for release on June 28th.