Check out this wicked new 10’’ out on US Taitu Records. 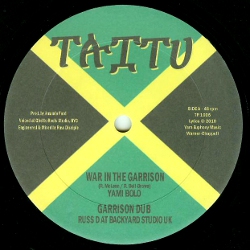 From England to Jamaica via Brooklyn, New York. That’s the route the new 10’’ out of Brooklyn’s Taitu label took to be released.

Side A features Yami’s wicked War In The Garrison, about the recent situation in Kingston. On the flip side, the underrated Cologne (previously known as Singing Cologne) gives his version with the herbalist No Pull Over. Both artists have voiced Russ D’s relick of his 90’s African Soul riddim. Available now on 10’’ at all good shops !